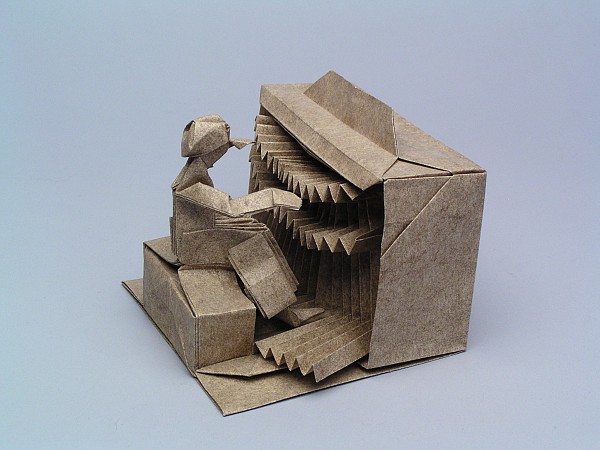 Beginning in the 1990s, the world of origami was dramatically changed by the introduction of mathematical methods in origami design. The most successful was a set of techniques called “circle packing, ” which was a systematic way of constructing any origami figure topologically equivalent to a tree graph. In the new millennium, circle packing has been augmented by many new techniques, collectively known as “polygon packing, ” which gives regular, easily less-insanely-difficult foldable crease patterns. In this talk, I will give an overview of circle packing and talk about the newer polygon packing techniques and will touch on several open mathematical problems that arise therefrom. Robert J. Lang is recognized as one of the foremost origami artists in the world as well as a pioneer in computational origami and the development of formal design algorithms for folding. With a Ph.D. in Applied Physics from Caltech, he has, during the course of work at NASA/Jet Propulsion Laboratory, Spectra Diode Laboratories, and JDS Uniphase, authored or co-authored over 80 papers and 45 patents in lasers and optoelectronics as well as authoring, co-authoring, or editing 14 books and a CD-ROM on origami. He is a full-time artist and consultant on origami and its applications to engineering problems and his origami artworks are shown and sold commercially in galleries in Santa Fe, NM and Jackson Hole, WY. He received Caltech’s highest honor, the Distiguished Alumni Award, in 2009 and has been selected as one of the inaugural Fellows of the AMS in January, 2013.