"The great white shark in Jaws knew exactly where it was going — to the closest pair of plump legs around. But where might it head if it didn’t have a tasty human snack in its sights?" 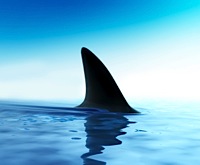 A new study suggests that some sharks and other marine predators follow mathematical strategies when hunting. Especially when food is scarce, these marine animals follow what researchers refer to as a "Lévy walk." This squiggly pattern resembles a fractal, the mathematical phenomenon whose shape remains the same no matter the viewing scale. Biologists have reported Lévy behavior in everything from deer to bumblebees, but many of those studies were flawed. Now, however, researchers have firm evidence for Lévy behavior in 14 species of open-ocean marine predators, including tuna, swordfish, marlin and sharks.